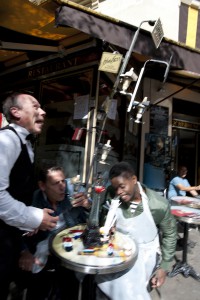 Mathis Collins left France to join Open School East, where he sought to pursue his interest in participatory and pictorial art. Taking with him such iconic figures as the ‘Garçon de café’ and the shisha pipes, he produced over the year a series objects and images representing groups of people making art collectively. This interest in public stages and the ‘workshop aesthetic’ is both a reflexion on Collins’ interest in the use of community art making as a tool of emancipation, and the representation of an art scene, both as a social event, and as a literary subject. By mixing 19th century aesthetics with commercial photography, and by using multi-culti objects found around coffee shops, Collins creates chaotic scenes where society is rhythmed by arts and craft. 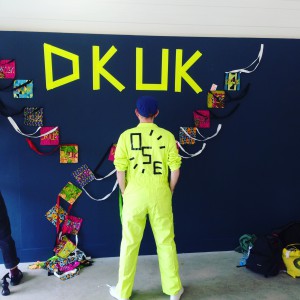 While at OSE, Daniel Kelly worked on a number of projects and events. He developed Saffron Avenue, a play that tells the story of the 1889 Dockers Strike, a pivotal moment in industrial relations in London, which was performed as part of the Camden 50 festival at Swiss Cottage Library. He co-organised Capital Artist Scum, a series of events that have explored the alternative monies and structures developed by artists for the making and distribution of art. He also successfully set up Hoxton Coder Dojo classes – a free coding class for kids between 7and 17. 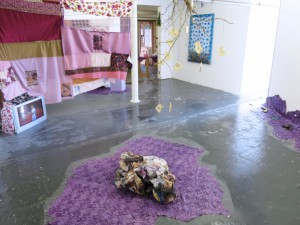 While at Open School East, Leslie explored society’s increasing connectivity, interrogating where and when it could be cut off or interrupted. A capsule clothing collection, Temporary Autonomous Girl, featured electro magnetic field blocking pockets as well as chakra protecting beads. Vanity Fair, a performance for Project Native Informant, featured sculptures with Radio Frequency ID tags and an alarm system being set off by them. Exploring the fetishisation of our connected tech objects is also important to Kulesh and has been realised in an Etsy style shabby chic install for Hotel Palenque in Berlin, called Baby BoBo. The work featured discarded cellphones, SIM cards and motherboards repurposed into key fobs, salt bowls, journals and other home products.

Realised with fellow associate Laura Yuile, Co-Pourri dove right into the current tropes of feminine making in contemporary art. Proposed as a new art movement, the launch in July at Caustic Coastal, Manchester, featured fabric works, how-to videos, and soap dipped business cards all in a pink and purple palette. During her time at OSE, Leslie also produced It’s What’s Inside That Counts, a solo show for Et Al in San Francisco, the No Rose trilogy for Open Source Festival, London, Sylvanian Fashion Week for Cosmos Carl online, as well as work for multiple international group shows. See more at: www.lesliekulesh.com 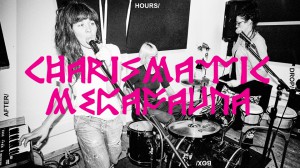 Continuing his interest in developing collaborative projects at the intersection of music, video and live performance, and through his ongoing project After/Hours/Drop/Box, John used his time at Open School East both to host events and to research new approaches to working in this area.

Popular public events such as AHDB: Charismatic Megafauna and the collaboratively organised Beyond Beyoncé: Use It Like a Bumper were specific outputs, as well as an ongoing moving-image project working with youth Carnival arts and dance group Tropical Isles, also based at the Rose Lipman building. During this time John also initiated Oh – an open-minded support structure for artists working across expanded approaches which is based on the independent record label model. John co-runs Oh with fellow artist Mat Jenner and its first release, the album Hg by Squares & Triangles, was released on vinyl in September. 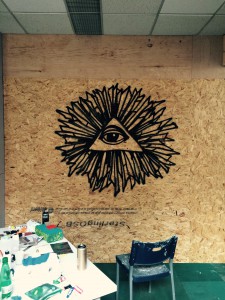 Kristin’s practice includes multidisciplinary installations and objects which behave like artefacts, acquiring meaning as they are metonymically intertwined with political, biographical and literary narratives, counterparts within virtual networks, and social exchanges. These objects mark the intersections between myth and fact, absurdity and rationality. At OSE Kristin developed a film and a text which trace the magical thinking and formation of communities within the judiciary system, the corporate sphere, the occult, and the art world. 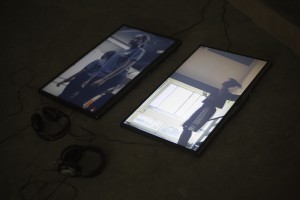 Over the last year, Paul Maheke Ngamaha has been investigating ideas of decoloniality and emancipation through a poetic yet political inquiry about the environments we inhabit and our subjectivities. At the intersection of feminisms and critical geography, his ongoing project Tropicalité is looking at the body as an archive to be reinvented and a territory to be decolonised. While at Open School East, he often convened dance as a practice of resistance to question sex politics, identity policing, Black body representations and their relationship to exoticism or notions such as agency and empowerment. For example, he collaborated with associates Marie Toseland and John Lawrence to devise a series of feminist events to happen at OSE about Hip-Hop cultures, Black feminism and Queerness. He also produced a set of works that scrutinised exoticised imaginations and colonial sexual desire. 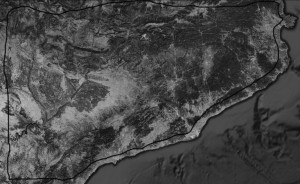 In an ongoing collaboration with Marie Toseland, the pair have been using tropes of ASMR to create live collective listening experiences. Live ASMR explores unseen physical responses from a social perspective; to define where solipsism meets community. Sophie will be developing this work further during her SPACE residency in 2016. Sophie also hosted the monthly meet-up of the Algerian Women’s Solidarity Group at OSE and in May led a casting workshop with Necole Schmitz. 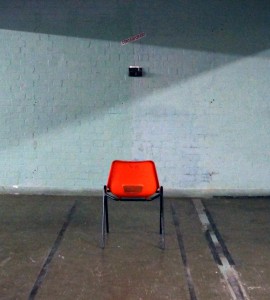 Hari Rajaledchumy proposed to study the figure of the stranger/foreigner within current investments of neighbourliness and communality, but during his time at OSE this concern transformed into a consideration of inclusionary regimes operating within contemporary art and its educational turn. Hari began studying his own positionality, practice and conduct within school, and within the larger context of access to art education. This resulted in a new series of works – an installation accompanied by a short artist text, paintings and collages – that address the accelerated anxieties of the incorporated late-arrivant, the ‘outsider’, the dilettante, and of the art-historical aporia they bring into organisations of collaboration, participation and community. 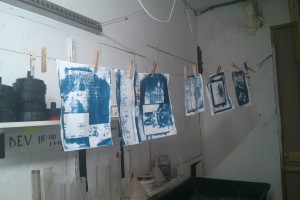 Based in her darkroom in Homerton, Tina developed a project with local schools with the twin focus of mapping and representation. Its aim is to teach photographic skills such as composition and making use of light and later analogue processes and also to examine what it means to photograph the environment and the people in it.

Homerton has recently become an active area with huge building projects and extreme changes happening on the main street, which is the focus for shopping and socialising for all members of the community. The project is intended to produce a picture of what it is like to live amongst the separate identities of a changing area, exploring Tina’s position as an outsider. The project also introduces historical/alternative processes as a means to gain a different way of portraying the environment, challenging ways of seeing and presentation. 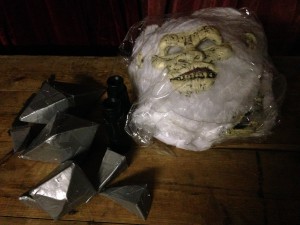 Shiri joined Open School East to see if she might want to become an artist, having worked as a curator for the past 10 years, realising there was only one way to find out. Shiri’s project evolved over the course of the year from research about the physical and philosophical qualities of sinkholes, to an investigation of alternative earth theories such as Hollow Earth, Flat Earth and Concave Earth and an exploration of geomythology and the link between science and fiction. Shiri was also interested in the potential of collaborating with non-artists, especially children, and the possibilities and limitations in terms of authorship, artistic language and responsibility towards an audience. These two interests resulted in Giant Bomb, an ongoing collaborative project with her 10-year-old son Lucian. As Giant Bomb they developed and presented a performance at Guest project (Dummy Never Fails, May 2015) and co-wrote and produced a short narrative film (Apollo One), a recreation of the Greek Myth of Apollo and the Python, which resulted in the institution of the Oracle of Delphi – a human link between geology and prophecy, matter and narrative.

In addition, during her time at OSE Shiri also co-organised the Antiuniversity Now festival www.cargocollective.com/antiuniversity 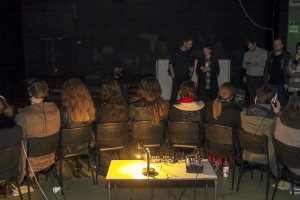 Over the past year Marie has developed her work and research around the sensuality of voice and lyricality of speech, in which the mouth becomes material: pitched as an erotogenic and sculptural space. She began to work collaboratively with fellow associate Sophie Mallett on a number of projects, kicking off with Live ASMR at OSE’s Open Studios in March 2015. A performance which has been repeated on Resonance FM, and as a cycle of broadcast for Radia, the work draws on the videos of the online community of ASMR artists, who combine phonetic and textural sounds with suggestions of intimacy to trigger the pleasurable tingling in the scalp typical of AMSR. The pair have begun working together on further sound works, which feature recorded scores and the voice.

Along with associates John Lawrence and Paul Maheke, Marie organised the public discussion Beyond Beyonce: use it like a bumper. The event featured a performance by carnival dance troupe Tropical Isles, who are also based in the Rose Lipman building, and aimed to question in what ways Black females today use Hip-Hop as a way to reclaim power and foster new subjectivities. Marie also hosted the This is my Tribe event Self Love as a Revolutionary Act. 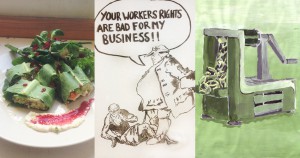 During the study program Michael has been: making paintings and videos, taking part in activism, organising and facilitating workshops, as well as hosting meals and walks to create social spaces for discussion and exploring how these elements fit together to form a practice. 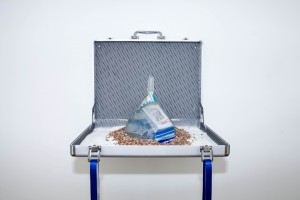 Laura’s work and research during her time at Open School East centred around global flows of capital and urban spaces of speculative investment – in particular, the role that current property developments within London play in reinforcing the notion of a World City and the effect this has upon everyday domestic life. She developed a new video work around these ideas as well as a body of new sculptural works made from household products and debris; considering questions not only of economic investment but of our investment in language, labour and material, and where the corresponding lines lie between need, desire and excess.

In addition to this, Laura has collaborated with Leslie Kulesh on the project Co-Pourri, with an exhibition at Caustic Coastal in Manchester in July. She also organised a two-part confidence and body language awareness workshop in September with drama-therapist Debra Colkett. This workshop falls under a larger programme of events Laura is developing entitled B*Yourself PLUS. The project attempts to rethink ideas of self-improvement, self-enhancement and everyday acting; and how we might achieve success, dominate a situation or empower ourselves through the effective use of language, body language and voice.