The Associates Programme is a free development programme offering a critical, informal and non-competitive environment in which to develop your practice and expand your networks. The programme is run according to principles of collaboration, experimentation and openness, and welcomes those who engage with these notions in different ways.

Applications for the Associates Programme are closed. The next call out will be in December 2020. 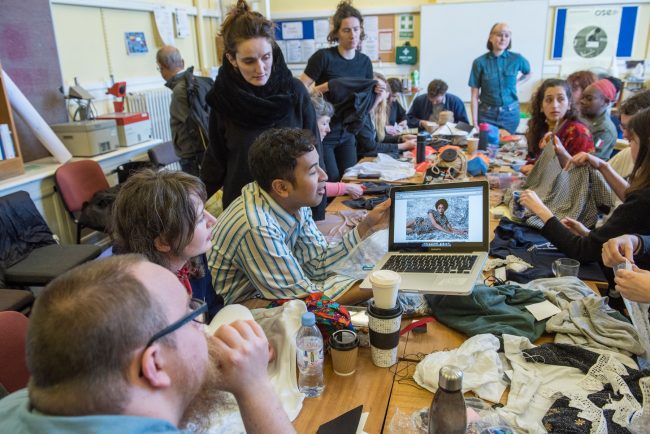 The Associates Programme runs across eleven months – from February to December – and is principally self-directed, creating platforms to experiment and meet long-lasting collaborators and peers.

We provide the Associates with:

The Associates come together two days a week (Mondays and Tuesdays) to receive tuition, meet their mentors, plan public activities and collaborate on projects. Tuition is delivered through a combination of workshops, seminars, group crits and excursions, many of which are open to the public.

While at OSE, the Associates share their practice via open events at different times throughout the year, and develop new work to be presented at a final group exhibition and events series.

Open School East is a multi-use space and resource and, as such, its common areas are utilised by a range of individuals and groups on different days of the week. Working, learning and sharing experiences and space with others is key to OSE’s ethos. 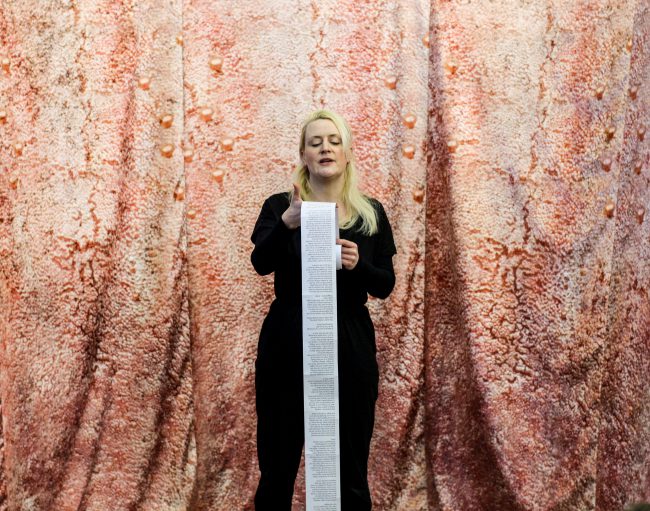 ‘Smooth and Rough’, 2017, performance by Associate Emily Whitebread at OSE. 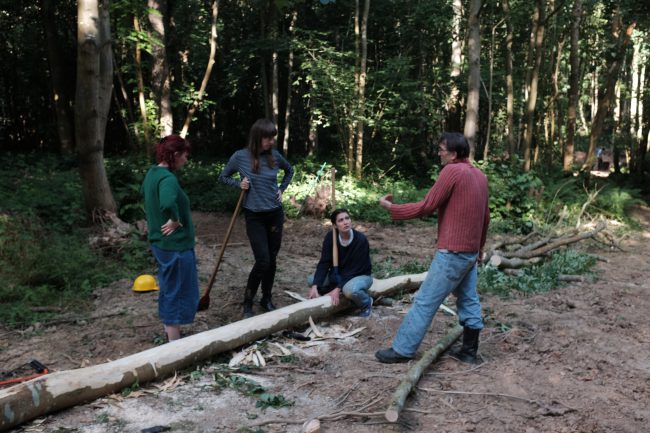 2018 Associates as part of a forest workshop with Matthew Darbyshire.

The mentors provide one-to-one support in the development of the Associates’ practice and projects, and lead theoretical and practical group sessions. The mentors visit regularly, once or twice a term. 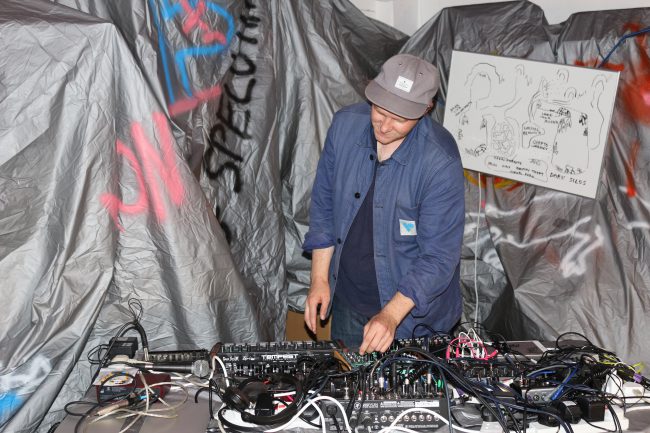 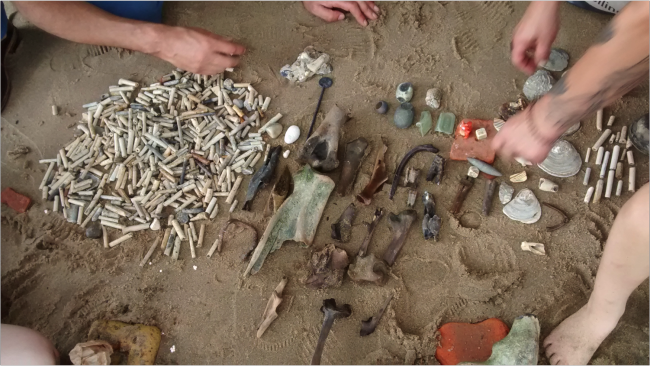 Associates at Open School East are emerging practitioners of different generations, with or without a BA, MA or formal qualification, who are seeking a critical, informal and non-competitive environment in which to develop their practice, and are interested in being exposed to a range of ideas and practices. We are particularly committed to supporting applicants from under-represented backgrounds and without formal training.

Former Associates continue to work collaboratively and programme events and projects at OSE, engaging in dialogue with the current Associates and forming a growing alumni community.

Visit the People page to find out more about the Associates. 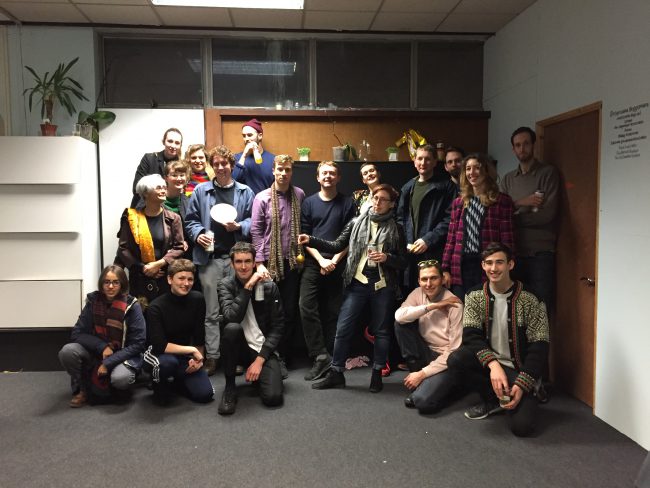 Open School East works across two sites. The first is our home at the Margate Adult Education Centre (AEC), where we occupy two large rooms on the first floor for all our learning and public activities. The second site is a studio on the ground floor of CRATE Studio and Project Space, a 5-minute walk away from the AEC.

Accessible 24/7, the studio is for Associates use only and gets reconfigured year on year. It is a 45 square-metre space, which this year was used mostly as a workshop space for hands-on work, alongside a few desk spaces. Basic tools are stored in the studios for Associates to use. Kitchen and toilet access is shared with the other studio holders. Quiet work tends to happen at the AEC, where the OSE library is also held. Access to the AEC however is limited to Monday to Friday, and the space is shared with different groups and activities during the week.

The AEC is a functioning Adult Education Centre run by Kent Adult Education, with which OSE colocates and collaborates. It was originally built as the Thanet School of Arts and Crafts, which ran between 1931 and 1974.

Each year we form a group of approximately 13 Associates from a diverse range of practices and backgrounds. We are interested in creating a pluridisciplinary environment where everyone supports and learns from each other. As such welcome artists, makers, producers, researchers and writers who seek to interact with people from other disciplines.

Prospective Associates are selected on the following criteria: quality of ideas and forms; a recognised need to access free and informal education; a genuine interest in being part of a group of people with different practices and experiences; a curiosity to expand one’s knowledge base and engage with a range of topics and ideas; a willingness to work collaboratively as well as individually, be self-directed and interact with members of the public at different moments.

At Open School East, we are committed to improving the diversity of our organisation as a whole and building inclusive cultures every day. Therefore we encourage and welcome applicants from all backgrounds and sections of the community, both with and without formal training.

Please note we take applications from individuals only. 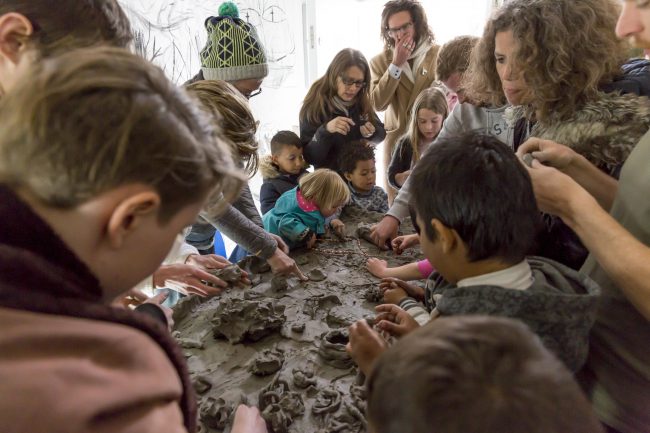 The OSE Associates have been invited by various institutions to show work and curate events. Host venues have included the Whitstable Biennale, Turner Contemporary and Well Projects in Margate, Guest Projects in London and the William Morris Gallery in London on invitation by Create London. The Associates have also taken part in festivals such as Art Licks Weekend, the Margate Festival and Antiuniversity Now. 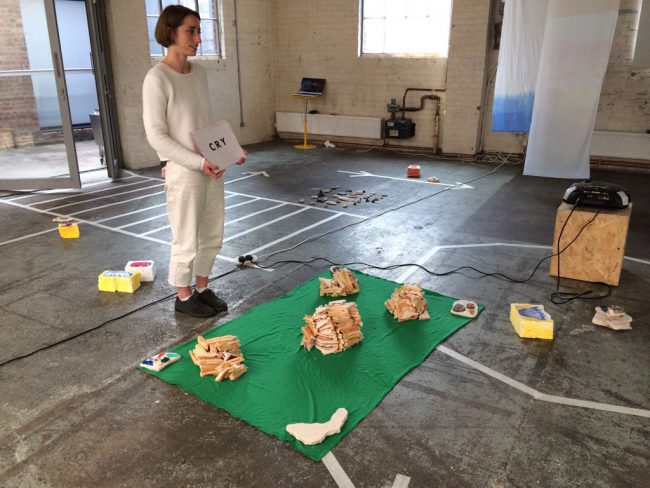 In 2018, OSE collaborated with Limbo in Margate to host four week-long residencies for up to four OSE Associates at a time. The residencies each culminated in an open crit, a public launch and a weekend-long presentation at Limbo. The Limbo-OSE Residencies enabled the Associates to experiment with ideas, research and forms, and to present their work in a professional setting. 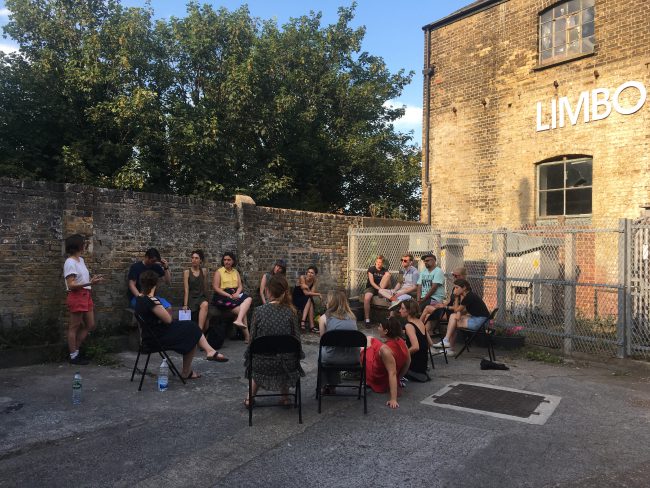 In June 2016, we were hosted by the Merz Barn in the Lake District. During the week-long artist retreat, the Associates explored the local area and possible future collaboration with Merz Barn, leading a reading group and excursions to places including the neolithic axe factory and the cathedral cave pictured below. 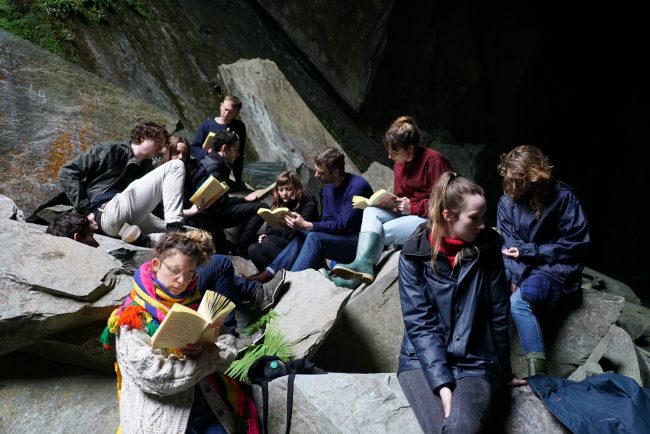 2016 Associates on a retreat in the Lake District.

In July 2014, July 2015 and September 2016, we were invited by Teresa Gleadowe for a residency at CAST in Helston, Cornwall. The week-long programme of discussions and workshops allowed the Associates time to reflect on their projects at OSE, and develop new events and works in an entirely different context, together with practitioners, thinkers and many residents of Cornwall. In exchange, OSE was happy to welcome CAST to our home in London, for a week in October 2014. The week was centred around another talks and events programme, including a talk by artist Paul Chaney on his ‘lizard exit plan’. You can view images of the Associates at CAST in 2014 here, and read Associate Jonathan Hoskins’s reflections on the first residency here.

In March 2014, we undertook a three-day workshop at Performing Arts Forum (PAF), St Erme, France, in the context of the project ‘Composing Differences‘ curated by Virginie Bobin. We invited practitioners Esther Salmona and Guillaume Fayard to lead the workshop and the retreat was made possible through funding by Fluxus.

In 2018, Marguerite Humeau led Term 1’s curriculum with ‘Emperor Qin’s Mausoleum‘, a 3 month-long collective project on the quest for eternal life. The project took as its starting point the hedonistic mausoleum that China’s first Emperor Qin (259-210 BC) commissioned for his afterlife. Marguerite Humeau and her guests åbäke, Owen Watson, Lucia Stuart, Sophie Mallett and Dr. Philip Gore – who work in the fields of art, design, architecture, botany and embalming – led a series of skills-based workshops, talks and excursions open to the Associates and members of the public. Those informed the collective making of a public project, which took the form of a scripted walk in Botany Bay, during which one encountered sounds, poetry, sculptures, performances and objects of uncertain nature.

In 2016, we asked artist Olivia Plender and filmmaker and researcher Ed Webb-Ingall to put together a curriculum revolving around models of collaboration, authorship, the politics of the voice, feminisms and how artists approach history. Practitioners from the fields of theatre, film, visual art, sound, community organising, activism and radical pedagogy were invited to deliver workshops and seminars alongside with Olivia Plender and Ed Webb-Ingall. Those were: Barby Asante, Oreet Ashery, Sonia Boyce, Carry Gorney, Janna Graham, Ciara Phillips, Frances Rifkin, Ultra Red and Rehanna Zaman. 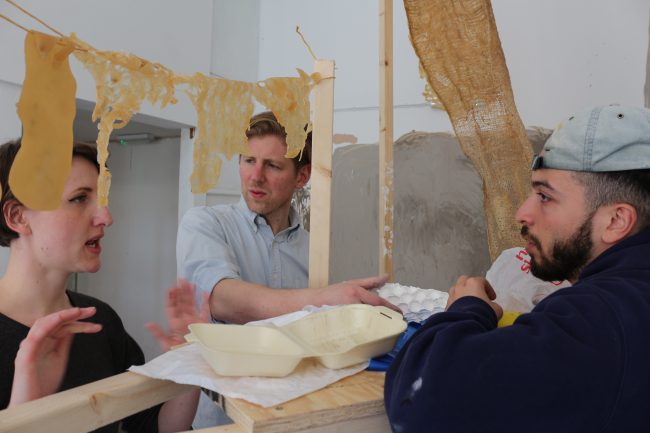 In 2014, the Year 1 Associates worked with AND publishing to develop a reader that reflected on their time at Open School East and the models of learning experienced there. This project which included several sessions on collaborative editing and publishing was supported by ArtQuest and Hato Press.

A PDF of the publication is available here. 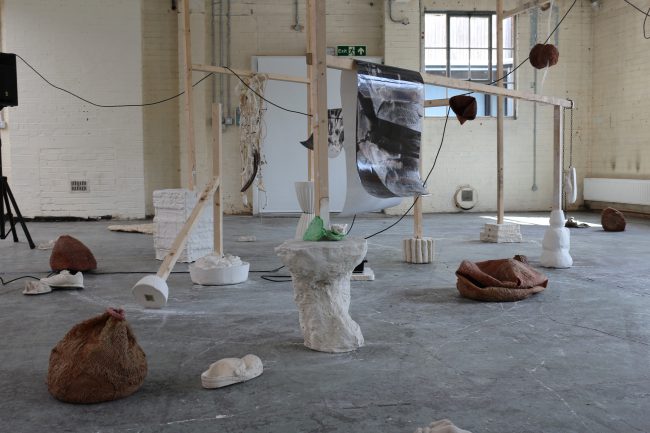 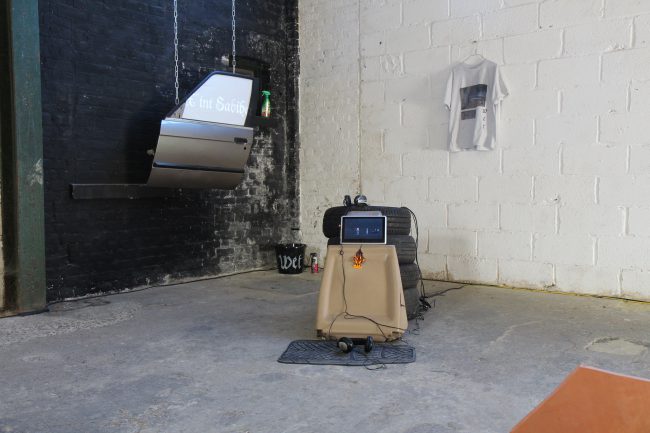 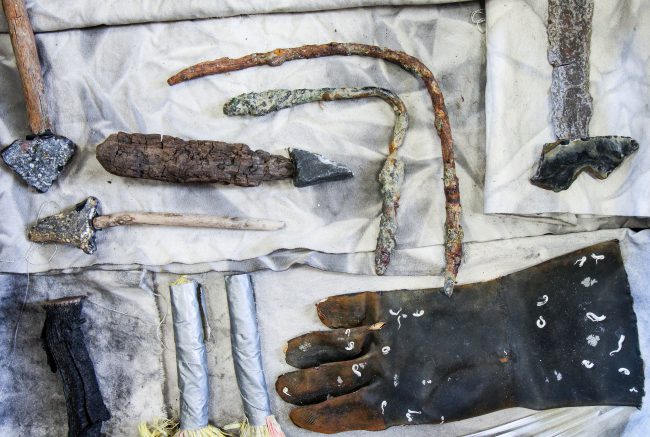 ‘The Quest’, 2017, installation by Associate Sara Trillo at OSE. 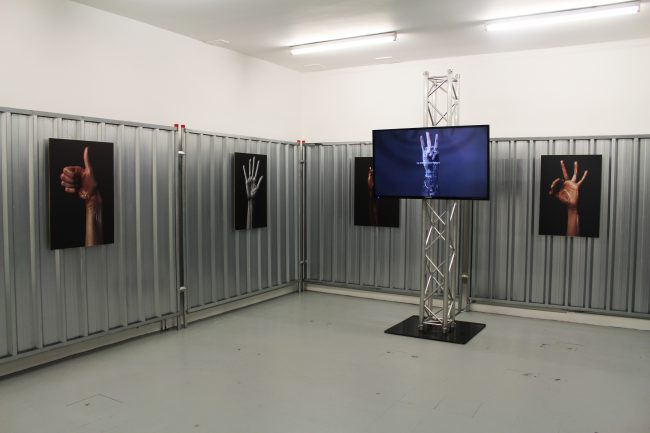 ‘Gate of Rome’, 2016, installation by Associates Henry Babbage and Louis-Jack
Horton-Stephens at OSE. 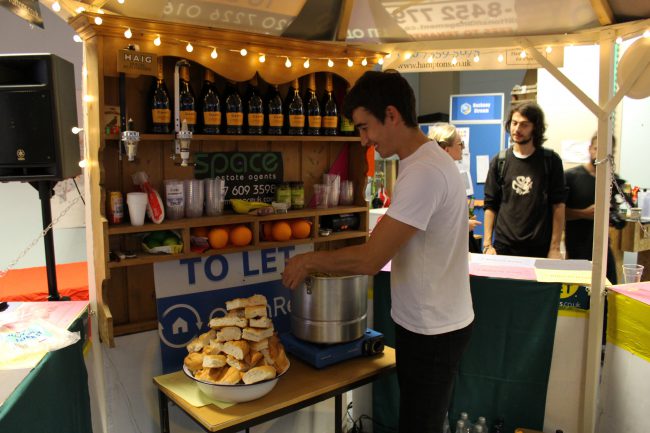 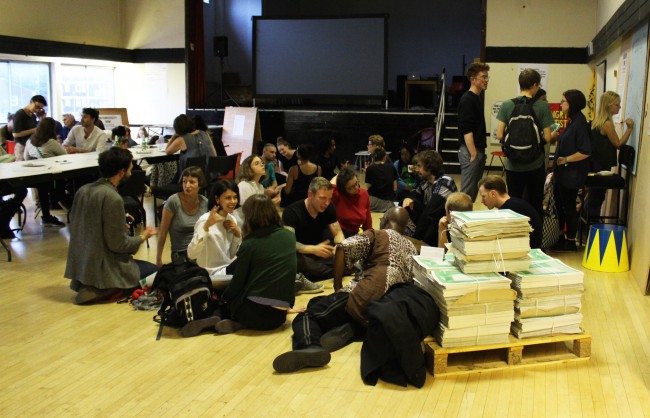 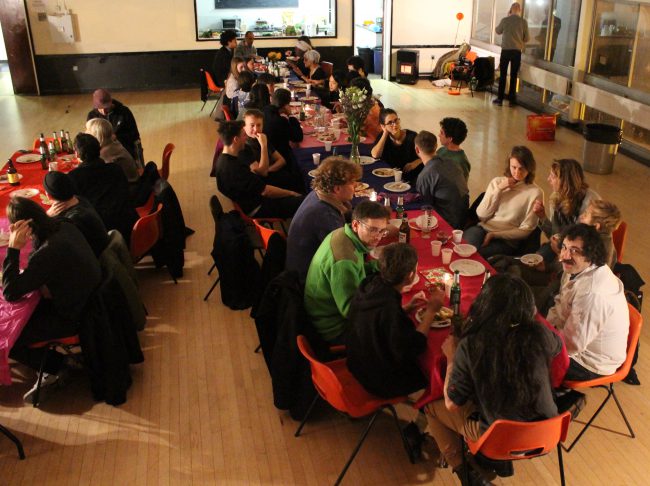 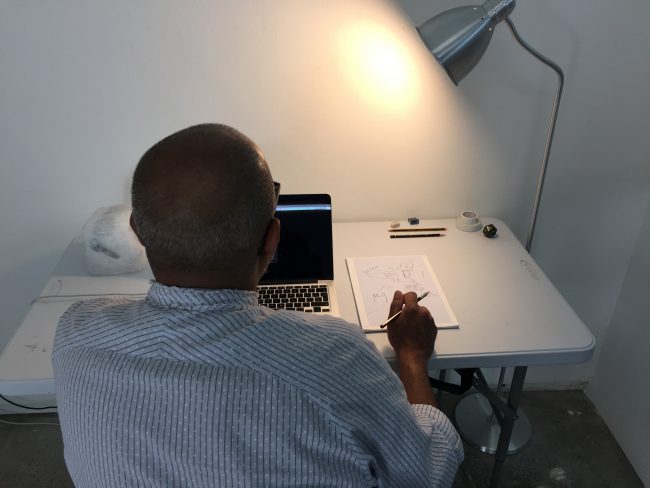 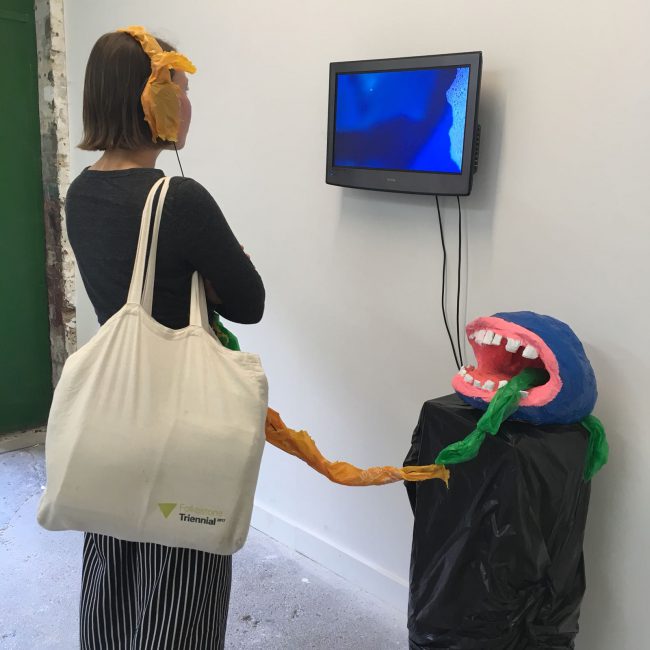 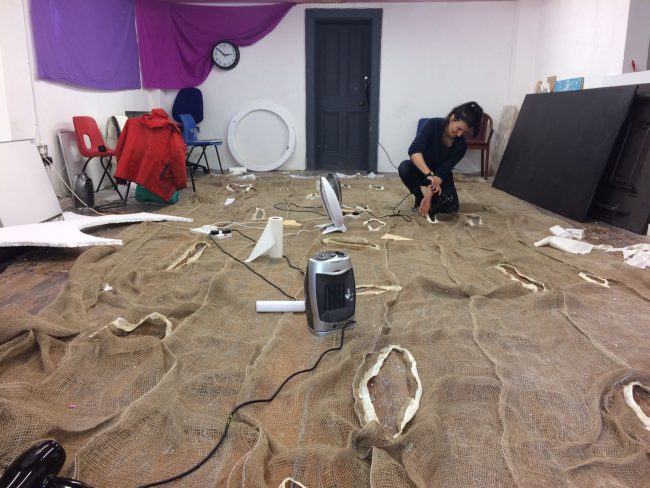 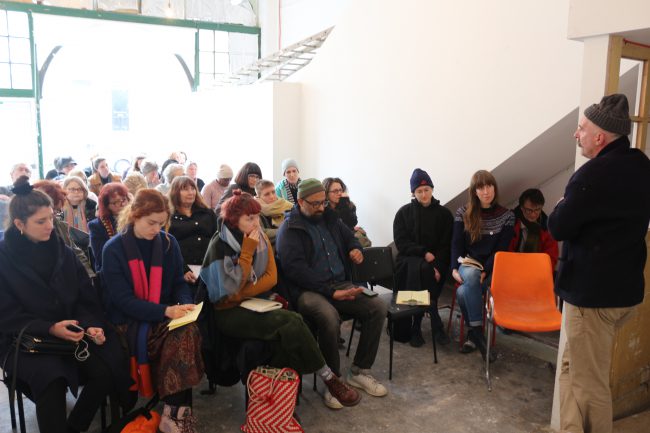 Talk by Dom Bridges of Haeckels, as part of Marguerite Humeau’s curriculum,
15 March 2018. 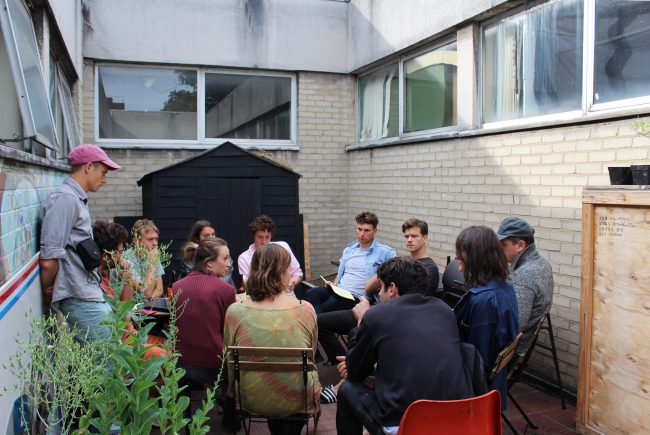 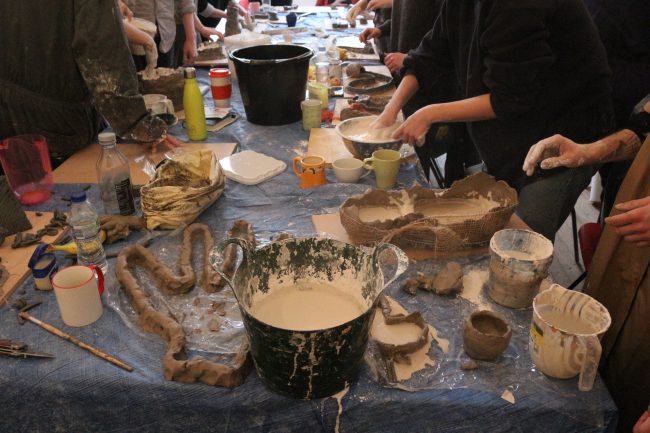