Yemi Awosile has been working on an ongoing project in her Open School East studio, exploring textiles and the idea of ‘designs for disassembly’– a term which addresses the question of sustainability in the assembly and disassembly of garments.

She has also initiated a new collaborative practice, ‘Workshop+’, of which ‘Reading Materials’ – examining the role of materials as audio objects – was the first in a series of live projects. These activities are centred on the playful and investigative use of everyday materials ranging from textiles to technology.

Please visit the W+ website for more information, and for forthcoming workshops.

During her time at OSE, Ania has worked on two projects: ‘H’ and ‘The Walking Reading Group on Participation’.

For ‘H’ Ania organised a series of dinners in private local houses in spring 2014. The conversations that unfolded as part of these dinners explored questions of neighbourhood, change, regeneration and gentrification, and will form the basis for a community play that Bas is working on in 2014. A small selection of the raw material recorded during the meals is available as part of a subsequent publication, which you can read online here.

The Walking Reading Group on Participation is a project in collaboration with Lydia Ashman and Simone Mair that offers participants a chance to read and discuss texts exploring participation, engagement, collaboration and social practice whilst walking through an environment. Since 2013, three editions have taken place in London, two of them with the support of Open School East. 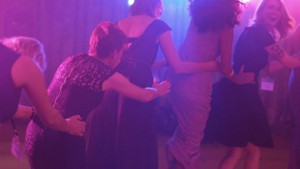 While at OSE, Lucy Beech researched and developed the premise of her film Me and Mine, which in 2014 was commissioned by Film and Video Umbrella and  in 2015 exhibited at the Harris Museum in Preston and The Tetley in Leeds. Me and Mine “examines how the so-called feminine ‘virtues’ of empathy and relationality have gained increasing currency within previously patriarchal industries. Set between a traditional undertaker’s and an annual award ceremony defined by one of its visitors as the ‘nucleus of the funeral industry’s female revolution’, the film follows a central, female protagonist as she negotiates her experience as a woman amongst women.”

A concern for ‘the problem of sharing a possible future’ led Jonathan to a engage in a series of events: the presentation of the audiovisual essay ‘Research Documents 1 – 4’ at MoMA PS1 following archival research in New York; the text piece ‘Before an Emergency’; and a major ongoing project, Catallax Point.

One of the projects to emerge as part of Catallax Point was ‘A New Rose Lipman for De Beauvoir?’, a community event hosted by Open School East, to create a space where individuals, groups and communities with an interest in the existing Rose Lipman library could get together to discuss its possible futures. It aimed to practically support resistance to developer-led transformation of urban space in East London, and in the process, to activate and interrogate interrelating practices of community, locality and libertarianism. Following the discussion event, the two most established and, arguably, representative community organisations in the area formed an autonomous group to produce their own possible future for the site and, if necessary, a programme of action to make it more likely.

During Open School East’s pilot year, Charlie has continued her work as a dance artist, while also working with young people in Tottenham and dementia sufferers in Bethnal Green. She has also continued to run her non-profit dance company Dark Island Dance, which is currently working towards a full length dance and music project for 2015, using experiences and issues related to mental health.

Charlie has also facilitated events with her group The Femmes Fatales, a collective of 5 female artists who masquerade as a riot grrl punk band in pursuit of uncovering their own and wider contemporary feminist rebellion. In March 2014 they hosted Feminist Feast, a provocative, playful evening of food and feminist discussion. The group also produced their first full-length event ‘XXXY?’ at the Yard Theatre in April, and will be touring this work in autumn/winter 2014.

Since February 2014, Matthew has been working on ‘The Bad Vibes Club’, a six-month programme of talks, and a reading group about negative ethics. Visiting lecturers have included: writer and theorist Mark Fisher on the trajectory of anti-vitalism in contemporary critical theory; and Daniel Oliver of the efficacy of awkwardness in contemporary participatory art and performance; and Robin Mackay, who lectured during Open School East’s residency at CAST in Helston, Cornwall, on accelerationism as political heresy.

You can listen to the Bad Vibes audio archive here.

Ross also explored alternative teaching methods, which included a guided tour by Mark Fisher along the Suffolk coast, the subject of his recent audio essay ‘On Vanishing Land’ (2013).

Graham’s work and research over the past year has centred on the Rose Lipman Building and the De Beauvoir estate in which it is situated. Focusing on the more idiosyncratic and outmoded aspects of the building, Graham organised a public discussion between the original architect of the estate Wilson Briscoe and architecture critique Owen Hatherley (images and an audio recording available here), which addressed the architectural design, its legacy and its relationship to other modern buildings in the local area.

This event forms part of a wider inquiry into how the Rose Lipman building fits into a continuum of modernist architectural design. As part of this, Graham created a series of coloured banners to adorn the outside of the building, thus “revealing the discreet functions within the internal spaces”, which were present during Open School East’s Open Studios in May 2014.

Lisa investigates knowledge-production through a combination of text, installation and performance, and fiction writing is a key component of both her installation and live work. Lisa was recently awarded Arts Council support for an ongoing project, which she has been developing throughout her time at Open School East, titled ‘Communal Materials; Or, Evolution Isn’t Fast Enough‘. Drawing from the idea of the ‘deaccessioned’ – a term which refers to the removal of things from a library, museum or art gallery in order to sell it – Lisa’s project focuses on materials, ideas and skills that are of ‘questionable value’ in the current economic climate.

She is currently working on ‘The De Beauvoir Labs’, a series of public events in which participants chosen from an open call are paired with invited participants with different skills. Lisa is also working on ‘A Call from the Library’, which will begin with a week-long ‘field-writing’ exercise of the former Rose Lipman Library building, culminating in a performance on Saturday 6 and Sunday 7 of September. In collaboration with sound artist Seth Ayyaz, Lisa will build a system which has the capacity to ‘listen’ to rooms and architectural spaces, and in effect ‘play’ them through sound and text. Their research in the former library will result in a live installation and public performance in which the building begins to ‘speak’.

More information on Lisa’s ongoing projects can be found here.

‘Limehouse Blues’, a new operatic composition performed at the Tower Hamlets Chinese Association in Limehouse, London and at Chilli Chilli Chinese Restaurant in Liverpool, June 2014, was developed by Tommy during his year at Open School East. The piece, which draws upon the history of the Chinese diaspora in Britain, and in particular, the popular depictions of the Chinese in the early 20th century, explores the human voice as a political and personal tool of resilience.

The work was produced following a series of workshops led by a Cantonese opera singer and a community choir in collaboration with 6-8 untrained singers from Chinese and other backgrounds.

You can watch a film of the performance, here.

Wish you’d been here is the start of a collaborative investigation by associates Andrea Francke and Eva Rowson, to explore histories and current thoughts of hosting, socialising and partying as a framework to reflect on contemporary art practices that involve working with people.

Wish you’d been here started in January 2014. Their research has included film screenings, seminars and discussions to explore ideas of hosting, spanning research from the political underground practices during the wave of South American dictatorships in the 1980s; the underground disco scene in 1970s New York; and the current DIY music scenes in the UK. They have also organised several parties at Open School East under the name Super Fumes!, transforming the diverse spaces in the old library building via events involving bands, musicians and artists from London and beyond.